The sixth Citizens' Panel survey was carried out in January 2020.

We asked questions about antibiotic resistance, access to and use of antibiotics, self-limiting infections and the impact of public health campaigns targeted at managing common infections.

In total, 599 Panel members responded to the survey which represents a 52% response rate. The results will support the work of the Scottish Antimicrobial Prescribing Group (SAPG) which is committed to using the feedback to help engage with, and inform, the public about responsible antibiotic use.

The public appear to have relatively good knowledge and behaviours around antibiotic resistance, access and use of antibiotics, self-limiting infections and public health campaigns.

Some suggestions about areas that need more public information and awareness include: 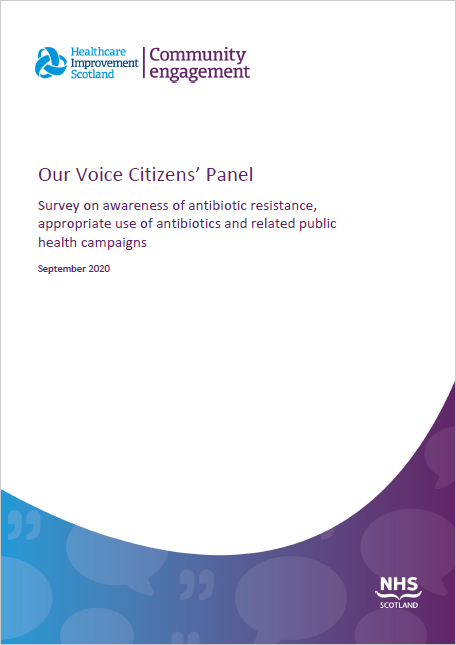 Campaigns designed to increase public understanding of antimicrobial resistance should emphasise that it is bacteria that become resistant to antibiotics not individuals.

Further emphasis should also be made that antibiotics are effective only for the treatment of bacterial infections not viral infections.

The results will support the work of the SAPG to help engage with and inform patients and the public about responsible antibiotic use.

85% of respondents had heard of antibiotic resistance.

85% correctly identified that antibiotics are effective in treating bacterial infections (like meningitis).

Panel members were more aware of some factors that contribute to antibiotic resistance than others:

94% of respondents said they have been prescribed an antibiotic.

Those who said they were prescribed an antibiotic which did not work in the first instance were asked why this was the case. The top 3 reasons provided were:

SAPG sought Panel Members' views on self-limiting infections – which will clear up on their own – and how these should be treated.

The majority of respondents correctly agreed with the following statements:

The majority correctly disagreed with the following statements:

The impact of public health campaigns

Spotting the signs of dehydration