Healthcare Improvement Scotland asked us to gather views on the new arrangements for death certification in Scotland from members of the public and faith groups.

The Certification of Death (Scotland) Act 2011 introduced a number of changes to the current arrangements. It established a new national Death Certification Review Service, run by Healthcare Improvement Scotland, which selects a sample of Medical Certificates of Cause of Death (MCCDs) in order to check their accuracy – regardless of whether the person is to be buried or cremated. Under the previous arrangements, a burial could take place before a death was registered. From May 2015, all deaths in Scotland must be registered before a body is buried or cremated.

We ran 3 focus group discussions with members of the public in Orkney, Aberdeen and Dundee to review the new arrangements for death certification, including request forms, processes and the information leaflet for the general public on the Death Certification Review Service. This report provides a summary of what people told us.

Additional discussion groups were later held at Cathcart United Free Church in Glasgow, and with members of the Muslim community in Dundee. 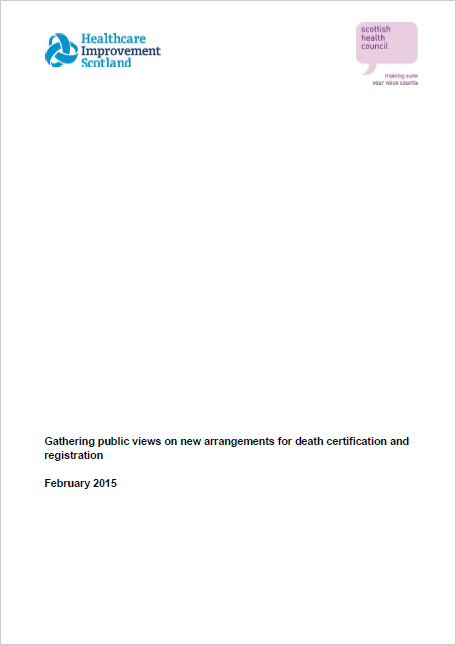 Many of the focus group participants commented on the language and terminology used by the Death Certification Review Service, and a common theme was the need for plain English. Feedback from members of the public was shared with the project team at Healthcare Improvement Scotland, and was incorporated into the Frequently Asked Questions and information leaflets for the public.