Gathering views on organ and tissue donation and transplantation

Gathering views on organ and tissue donation and transplantation

The Scottish Government asked us to gather views on a proposed 'opt out' system for organ donation in Scotland.

In 2017 the Scottish Government consulted on proposals to increase the numbers of successful organ and tissue donations in Scotland. One suggestion was to introduce a 'soft opt out' system, which assumes that most adults can be a donor when they die unless they have specifically stated that they do not wish to.

The Scottish Government wanted to hear more views on this proposal and asked us to arrange some discussion groups. We particularly wanted to include people who might not normally respond to written consultations or who might be affected by a change in the current law.

Discussion groups were arranged in 4 areas: Ayrshire & Arran, Forth Valley, Greater Glasgow and Clyde and Fife. Two discussion groups involved young people and two involved adults with a learning difficulty. Additional work was done to include the views of looked-after young people. A total of 47 people contributed comments in the discussion groups and an online survey. This report summarises what people told us.

The Scottish Government also commissioned an Easy Read version of this report, which was produced by People First.

We would like to thank all the participants who shared their views, as well as the staff from People First Scotland, Barnardo's Scotland, Balfron High School and Arran Youth Foundations for their expert advice and support. 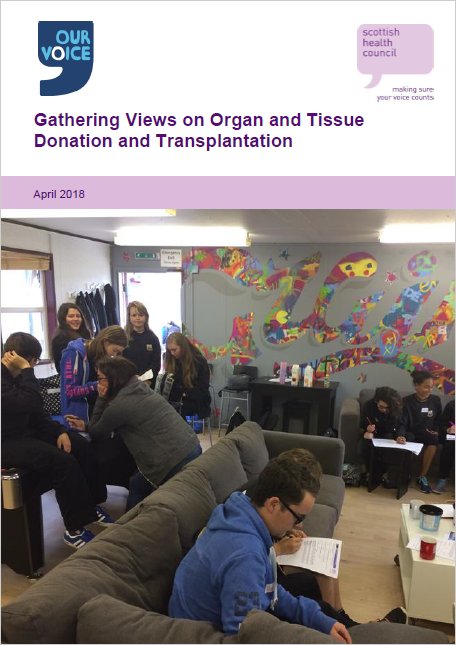 The Scottish Government introduced a Human Tissue (Authorisation) (Scotland) Bill on 8 June 2018. Feedback gathered by our focus groups helped to inform the Policy Memorandum for the Bill as well as the Equality Impact Assessment and Child Rights and Wellbeing Impact Assessment.

The Bill became law on 18 July 2019. The introduction of the new legislation was accompanied by a public awareness campaign, which was recommended by focus group participants.

Scotland moved to an opt-out system of organ and tissue donation on 26 March 2021. More information about what the new law means for people can be found at organdonationscotland.org