The Scottish Government asked us to gather information about the existence, role and support for Maternity Services Liaison Committees across NHS Scotland.

A Maternity Services Liaison Committee (MSLC) advises NHS boards on the care provided to pregnant women and their partners and the parents of newborn babies. It makes sure NHS boards listen to and take account of the views and experiences of the people who use local maternity services. Made up of service users, it monitors what services are being provided to expectant and new parents and recommends changes and improvements. It acts as a voice for the people who use these services.

Going forward, the Scottish Government wants to ensure that maternity service users have:

In 2004, the Scottish Government made it mandatory for all NHS boards in Scotland to have a Maternity Services Liaison Committee. 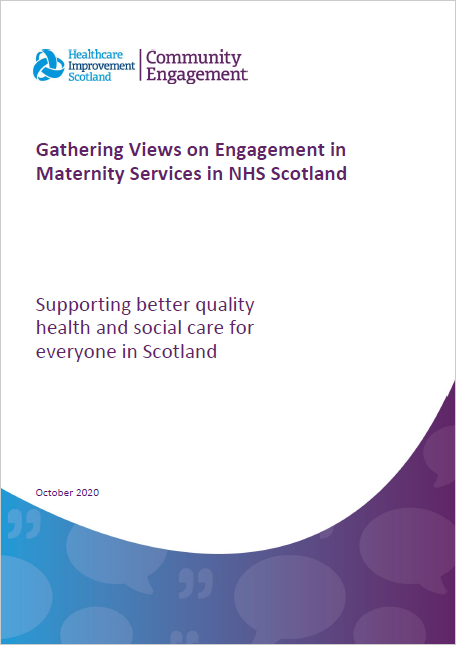 We discovered that 6 of the 14 territorial NHS boards had such a group or committee. A further 2 had recently ceased to function and 6 areas used other engagement methods. NHS Grampian and NHS Highland each have more than one group or committee.

Through our Engagement Offices, we engaged with NHS boards and lay members to establish:

We found that the majority of NHS boards had or had tried to establish a Maternity Services Liaison Committee since 2000 with varying degrees of success. During this period most NHS boards made changes and in some cases multiple changes, to the original model. Since the previous guidance relating to the Maternity Services Liaison Committees model, a number of NHS boards have adopted a range of alternative effective engagement approaches. The findings clearly indicate that the way forward for maternity services is to ensure that all engagement processes ensure that the voices of women are taken on board in a proactive and inclusive way.

Ways of promoting the MSLC varied, and a common complaint from lay members was the lack of information about the role of the group available to them prior to joining.

All NHS boards said that recruitment and retention of lay members was their biggest challenge. In some areas they were unable to gain public or service user interest in joining a committee and therefore were unable to establish a group.

A number of groups have acknowledged the need for a clear aim and purpose and, where this was lacking, lay members felt this led to them being uncertain of their role on the group. For those NHS boards who had - or previously had - a group or committee, the experience of a formal, board-room style meeting was felt to be intimidating for many members of the public, especially when considering that a service user may have a baby or young child(ren) with them.

It was highlighted that time commitment expected from lay members and staff to be actively involved in an engagement activity was difficult to manage. There was also an awareness that parents and families had a number of competing priorities and for them to give up the time required to participate could be very challenging.

The need for ongoing support and training for lay members and staff to participate effectively was recognised, as well as the need to raise the profile of why maternity services are engaging service users and carers. For some rural areas it was felt that the demographic of the group was fairly static and therefore engagement tended to be representative. In some areas, however, staff and lay members felt that engagement was not representative of recent and current service users.

We would like to thank everyone who took part and shared their views about service user engagement in maternity services and their suggestions for improvement.

All feedback received has been shared with the Scottish Government.